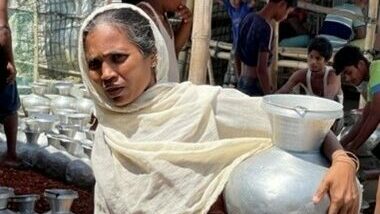 Refugees in limbo – what does the future hold?

Advent is a time of preparation – and looking forward. We celebrate and herald the coming of the Prince of Peace, who as the Christmas narrative reminds us, is born in a borrowed animal stall before the Holy Family’s flight to Egypt as refugees. Refugees and the concept of peace have been uppermost in my mind after my recent visit to the Rohingya camps in Cox’s Bazar in Bangladesh. 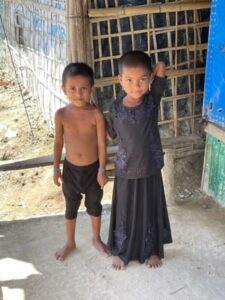 It is over five years since the expulsion of Rohingya people from villages in Rakhine State, Myanmar and the influx into the Cox’s Bazaar region of Bangladesh. Their numbers have been growing over the years and today there are over a million Rohingya people spread across South-East Bangladesh around Cox’s Bazaar. For many Rohingya refugees from Burma, who have made the perilous journey across the border into Bangladesh in order to escape attacks from the Burmese army, life has been tough with little access to education, health services or sanitation. The continued support for this refugee community is very uncertain as funds are running out due to competing demands in Ukraine. It is likely to become a long drawn out and protracted crisis. What does the future hold for the Rohingya children?

In Jamtoli camp, Christian Aid has been working through a partner organisation Dushtha Shastya Kendra (DSK) supporting a health post that serves both refugee and host communities in the area, providing two doctors, a nurse and a pharmacist. Over 104 patients are seen on a daily basis and their conditions range from skin diseases, common coughs and colds, family planning, ENT consultations, respiratory diseases, and foetal illnesses. 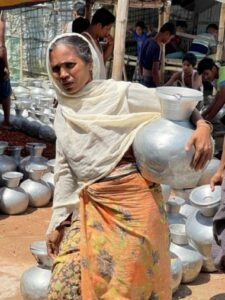 Christian Aid is inspired by the gospel imperative of bringing Good News to the Poor. The King of Kings is born in a cave, the Creator empties himself and is made poor for our sake. This hope of God, who overturns the mighty and the proud, is the focus of the season. It is also very aptly expressed in the Magnificat, Mary’s song, which states that the high and mighty fly scattered to the winds, the weak and the poor are raised to the heights, the rich go empty away and the hungry are filled with good things. I entreat you to turn your minds to this God of Hope that we might kindle ourselves and others with a fire that will make us passionate enough to make the whole of God’s world a place where people rise out of poverty and live with hope. It is about being United in Hope.
In preparing for Christmas, what are we doing? Indulging ourselves or sharing the message that Christ’s birth has effect today. That the coming of the Christ child in all humility is an opportunity for people, like you and me, compelled by love at this time to reach out to those who are poor and oppressed and stand alongside those whose aspirations, like the Rohingya refugees in Bangladesh, have thwarted by poverty, conflict, and uprootedness.

Might you consider a gift to Christian Aid for the Rohingya refugees this Christmas?
Ramani Leathard